SeaWorld Returns Rehabilitated Manatee As Heavy As A Vespa Scooter

Two of the animals were particularly special, such as the 500th manatee rescued by the park as well as a manatee that was rescued two years ago as a tiny, 55kg orphan and now weighs a whopping 320kg – that’s almost the weight of a Vespa Scooter.

The manatees were returned near the warm water outfall of Port St. John power plant in Brevard County. The site was chosen to provide them with a warm water site during the current cold snap. There, the inexperienced animals can link up with established wild manatees, also seeking refuge from chilly waters.

The reason manatees are returned during cooler weather is because other wild manatees naturally congregate in specific warm water sources during these periods.  Doing this allows the new animals to acclimate to a larger group, from which they can learn migratory patterns once the weather warms up.  It also allows the newly-released manatees to familiarize themselves with a specific warm water site to return to the next time temperatures cool down.

SeaWorld Orlando and the other Florida zoological facilities work closely with the Florida Fish and Wildlife Conservation Commission (FWC) to determine when a manatee is ready to be returned as well as the proper time and location for the return to take place.

About the manatees rescued by SeaWorld:

You Won’t Believe What’s Coming to SeaWorld in 2023! 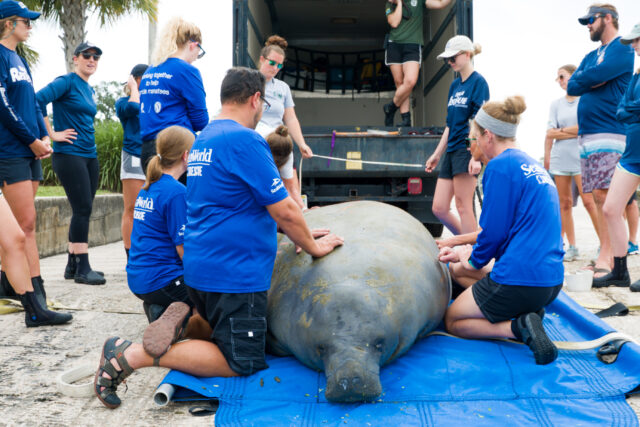